The concert in Studio 5, Sofia, Bulgaria was very successful and a prove of that is the brand new video of Outhentic.

“Razoral Dedo” is the new song Outhentic recorded and filmed live at their last show and this song will be included in their upcoming album. The album itself will be recorded in April, in Salzburg, Austria and officially released in the fall. 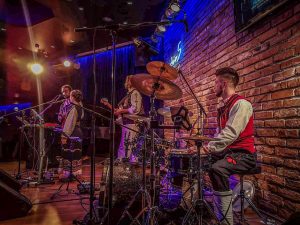 “The show had an amazing energy and for another time the musicians surprised everybody with a few new compositions that we hadn’t heard until then.” a fan of the band shared after the show.

The musicians crossed a lot of genre boundaries and went to new unexpected musical territories. The audience was singing along with them the songs they already new and enjoyed the ones they heard for the first time. Guest musicians again were: Borislav Iliev – Guitar and Stoil Ivanov – Drums

The live video is uploaded on YouTube and you can check it out here:  Razoral Dedo Live