The Bulgarian ethno-jazz band which will conquer the stage of one of the biggest music festivals on earth – Glastonbury fest is called Outhentic.

The band received a special invitation from the organisers of the prestigious festival in Glastonbury, UK in the beginning of 2017.

Boyan Boyadzhiev, manager of the Bulgarian booking agency”Panharmony”, who has been working for several years now on exporting Bulgarian artist all around the globe, introduced Outhentic and their music to the organisers of the prestigious fest. The organisers fell in love with the music and they decided to invite the band to this year’s edition of the festival. The festival is held from 21th to 25th of June this year. Outhentic will play on 24th of June at the Toad Hall stage which is located in the Green Fields area. 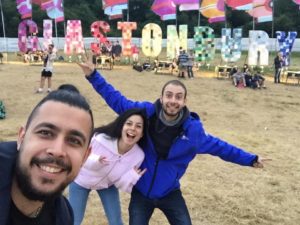 Achievement and recognition both for Boyan and Outhentic, as well as for the whole Bulgaria, is the fact that the organisers of a festival of this rank have chosen to invite an ethno band to present the Bulgarian folk music and language to the audience of the festival.

Another interesting fact is that among the other names invited to participate in Glastonbury Fest are some of the most prominent names in world of pop music – Ed Sheeran, Katy Perry, Craig David, Shaggy, Major Lazer, Lorde, Emily Sande, the British alternative rock band – Radiohead and many others. On the stage of Glastonbury Fest, besides all the music performers, there will also be many great performers in other areas, such as the famous magician Dynamo.

On the day of Outhentic’s concert, the young talents will perform both the songs from their debut album “YesToday” and some new songs and arrangements that the musicians have prepared for the audience of the festival.